This is a very brief video recorded by Ramón Rentería during his interview for the El Paso Times.

Video made during interview for El Paso Times–screen shot

Daniel Chacón, the prize-winning author with international renown, interviewed me on Words on a Wire, a weekly literary program on KTEP, the National Public Radio affiliate in El Paso, Texas.  I also read a poem from Poemas ante el Catafalco:  Grief and Renewal.  In the weekly “Poetic License” segment of the show, Azu Domínguez read a story and sang a song by Pedro Infante. 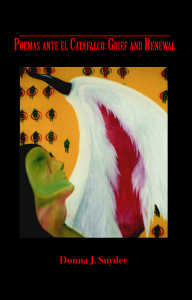 Today in the Spiritual Quest/Speculative fiction class we shared a pomegranate. The fruit is associated with death and re-birth, with Persephone who ate a few seeds and hence has to remain underground during the winter.

So maybe people were a little nervous taking a taste!

A Jewish teacher once told me that as there are 613 miztvot (commandments, or some say, good deeds) there are 613 seeds in a pomegranate. I didn’t count, but like the idea. The Kabbalists say that since some mitzvas can only be performed in a male body and some only in a female, there is reincarnation or transmigration so one soul can complete all.

Soon it will be Rosh Hashana here in New Mexico, with my yard full of sunflowers and grasshoppers. Every year one praying mantis appears–this year it is on the door of my studio. A sweet new year and shalom to all.

“In Progress on the Subject of Immensity (University of New Mexico Press), Leslie Ullman writes of the grandest aspects of this place, this space of infinite blue or black above and expanses of tans and greens on “the earth’s curve” here below.”

John Thomas Allen searches for the eye of God on a trail blazed by luminaries of literature and philosophy. From Arthur Rimbaud to Andre Breton, by way of Anthony Burgess, Mário de Sá-Carneiro, Epicurus, Paul Célan, Gertrude Stein, Guillaume Apollinaire, the Virgin Mary and others, we arrive at a time and place “where the ozone of white glass glows brighter and brighter with the smoke of memory machines. . . .

54_The Tension_[as in Posición Fetal].